Empire Magazine's June issue features a segment dedicated to Shane Black's The Predator movie and with it, a new still! Below, Empire have shared that new still showcasing Boyd Holbrook's Quinn McKenna being held against a wall by one of the Predators - this scene was shown in the first two trailers currently released: “There’s more a sense of espionage thriller to this one,” Black told Empire in the new issue. “The Predators have attracted attention now, and the global intelligence community is involved.”

The female is aiming at the human. Let the reckless theories begin!

There’s more a sense of espionage thriller to this one

It's like this, see? Puts down that Shuriken or my boys will fit you with concrete galoshes and send you to an eternal vacation with the fishes see? 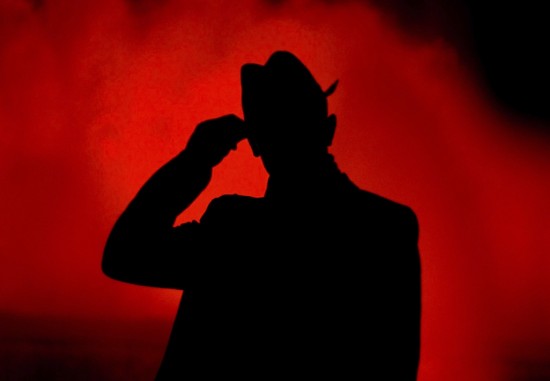 So we could see a Predator Siding with some Humans vs Corporate/Military Scientific kind of Company...  Which maybe would make sense for the Mega-Predator to be a Engineered Frankenstein of a Predator these guys would use to their own Agenda.

BigDave It sounds like this Predator is not a complete surprise to something like a research company. It seems possible there could be a Frankenstein's monster angle to it.

I am smelling the Female Protagonist is lead to think Predators are coming here to Genetically Evolve themselves, but she latter finds out actually its the Company that is Genetically Engineering the Predator DNA.

Maybe the Predators could be trying to Harness our DNA and the Company then think... Actually we should Genetically Mess about and Create our own Predator.

Appears to me we see those Soldiers suffering from PTSD are ambushed because those Predators are after ONE Guy in Particular, i have a feeling these Predators... or another two latter, will team up with these guys to put a Stop to the Military Company using/reverse Engineering Predator Tech... then they unleash their Frankenstein on those guys and Predators.