I never saw those fangs do anything except appear really intimidating. I only saw the movies so IDK if literature addressed it.

It would appear they would pierce and grip a target to inflict further brutality with its regular mouth or arms. Or maybe they are important to some sort of procreation process.......(I had to preemptively go there- sorry...)

they don't really look like theyd be strong enough to have any use on inflicting damage so id say theyl be for courting purposes. maybe the bigger the fangs and wider they spread the more attractive a mate they make?

But i think at INCEPTION of Concept... it was to make the Predator look Awesome and Original and so it was a Aesthetic to make the Creature Stand Out without actually having any real Purpose... We have the same with the Xenomorph and its Dorsal Pipes/Tubes.

Which because we dont have a clear Purpose... allows us to Debate such things and try and come up for a Logical Reason for them.

BigDave funny how things are added with no real purpose other than to look cool... then its left to the next content creators to flesh out, or fans to theorise on :)

ali81 is on the mark, they are depicted as sexual selection traits in some of the novels; Perry's Prey and War novels at the least.

Perhaps if Tiwaz is about he can confirm if this was addressed in Lebbon's Rage War trilogy....I can't remember lol

I think i will have to invest into looking at/reading some Novels, may as-well while i dont really SLEEP lol  so maybe those Prey and War Novels are worth checking out.

Yes, it could very well be a courtship thing. But females have the fangs too. Maybe it is about how one carries him/herself? 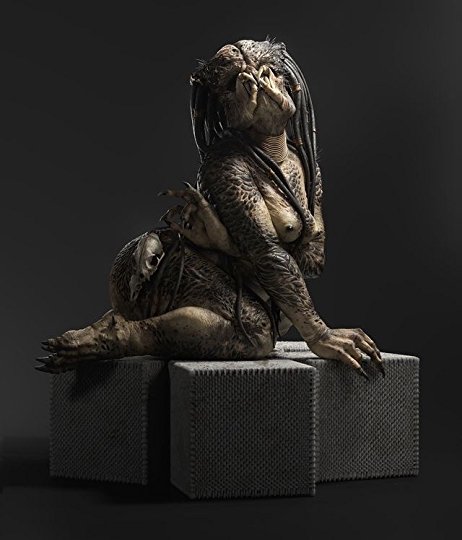 Behind the scenes, the "Mandibles" were actually the idea of Terminator and Avatar creator/director James Cameron. Cameron was sat on a plane with legendary creature effects maestro Stan Winston when Winston was sketching designs for the first movie (a Rastafarian-esque, tribal hunter) after it was decided to redesign the antagonist of the movie. Cameron related he had always wanted to see something with Mandibles and thus Winston added them to his design.

Trending Articles
Transformers: The Last Knight to delve into Optimus Primes past?
Japanese Star Shun Oguri Joins Godzilla vs. Kong
Book of Boba Fett revives the Naboo N-1 Starfighter as The Mandalorian's new Ship!
Alien: Covenant concept artist Dane Hallett tries his hand at Predator!
King Kong – From Films to Video Games, What’s Next For World’s Favorite Beast?
Kong marks his territory as Godzilla vs. Kong filming gears up!
The best bingo halls around the world
Scrapped Design Concepts for Alien: Resurrection's Newborn Xenomorph
Breaking: New Godzilla Singular Point Trailer Revealed
A Quiet Place Part 2 will explain its Alien Origins! Watch the Trailer Here!
Forums & Community
New episode of the Xenomorphing podcast! 2,923
First Impressions: Do you think Prey (2022) will be better than The Predator (2018)? 7,321
A pitch for a Predator movie to be set in Afghanistan ? 14,500
what a predator game should be like 5,229
New Predator Forum updates - Predator 5 Movie Prep! 19,669