Referenced only in comic books up until this point, Shane Black will finally introduce cinema goers to Female Predators in The Predator! According to a panel hosted byÂ CBR, it appears the Fugitive Predator is in fact female:

One of the clips screened featured Olivia Munnâ€™s character, Dr. Casey Bracket, about to be attacked by a female Predator in sleek, technical armor, when a larger Predator attacks another one of the aliens, distracting the female Predator. The larger predator is a â€śMega Predator,â€ť the result of genetic tampering within the alien society.

I've already gotten confirmation from someone who is involved making this film, there is no female Predator in this movie

CBR has been fairly reliable in the past with reports of this nature. Can you provide any additional sources to back that claim?

I'm pretty sure I've heard of this before.

Chris, well it makes sense judging from the body shape (ok, no huge tits, but smaller shoulders and stuff) and the mask (way more feminine then before). I've asked on 2 threads already if the creature is a female but no one seemed interested enough to answer ....

Maybe this particular female predator is flat chested? I mean not every human female has D-cup breasts. Most are around B or A

^Also are we entirely sure the Predator species is mammalian? Humanoid or not if Predator isn't or not entirely a mammal, their females may not have breasts like ours. While it is possible the female is flat chested, it is also possible that female Predators don't have breasts. That would also mean they don't nurse their young like we do.

"ok, no huge tits, but smaller shoulders and stuff"

This Predator does look less Physical compared to ones we usually see.Â  And while we have seen Artwork, Models and the like of Female Predators where they are quite Busty and almost like our Female Klingons...

I had mentioned this before, that would a Predator Female have BREAST? 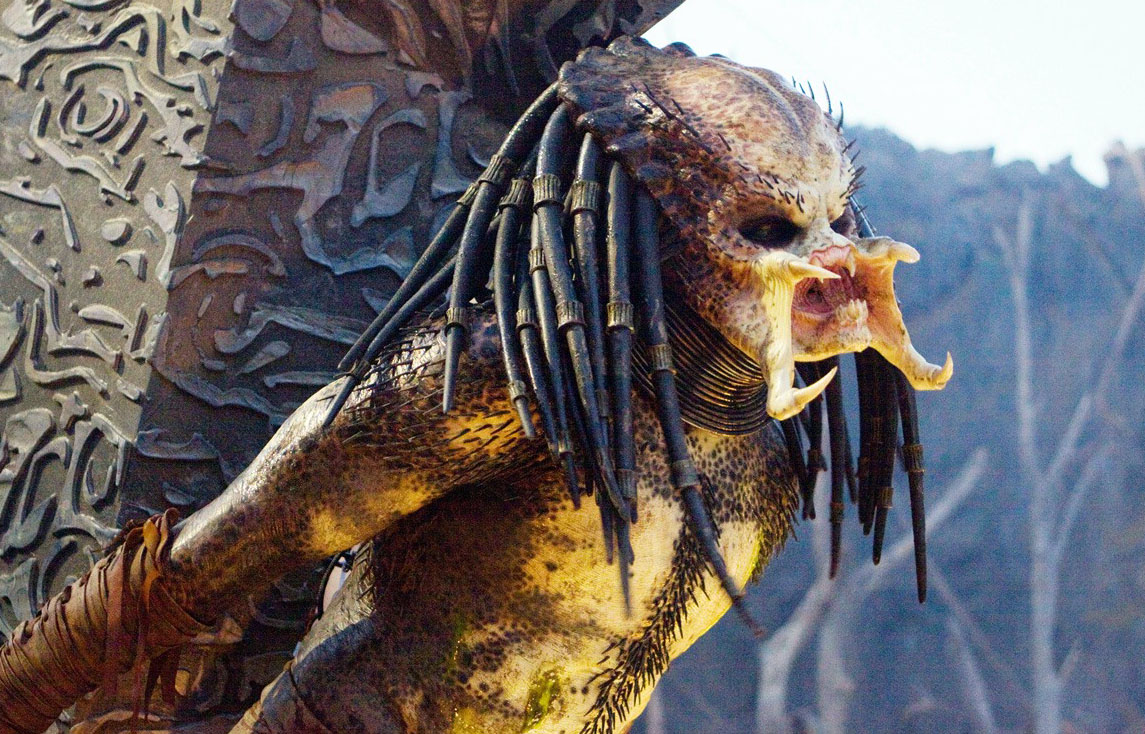 We have seen Topless Predators a few times and they lack NIPPLES...Â  so its maybe Logical that their Species Do-Not Breast Feed and so there would be NO reason for Females to have Breast.

So looking at the AESTHETIC of the Predators, while Humanoid, i seem to think they have more of a Reptilian/AmphibianÂ look to them and these Do-Not produce Milk for their Young and so i think its Logical that maybe Predators dont either.

We could even Ponder if they are Born in Eggs?

That may be fitting where the Eggs are then at a certain Stage, they are taken to a place and Placed together near Food Sources where its a RITUAL where only the Strong Survive like Sea Turtles and once they Survive this Stage they are then collected and then Raised within the Predators very Ritual/NobleÂ Society... i just think this would be very fitting for the Race.

Rather than being Nurtured as Suckling Youngsters..

been confirmed, its not a female

Indeed while some shots it looks a little Less Heavy Built than a Predator we usually see, we do have to bare in mind was it Shane Blacks Comments about the Large 10ft Predator where they said about going for a more Athletic look and so the same could apply to other Predators we will see in this Movie.

I do wonder if we would ever see any Females in Future but i still suspect it makes No Sense for them to have Breast.

iv hear some reports that Fox/whoerver is in charge now have actually discussed female predators but are apprehensive to show them believing there will be backlash. only way I think wel get to see females is in a flash away scene of their homeworld but I don't see a female yautja getting a large role in a film

I think thats a shame....Â  I mean the Queen Xenomorph gets quite a Large Role ;)Â  And Ripley...

I think IF this movie does well, it opens the Door to explore more movies, and i think it would be neat to pay some visit to their Home-world or a Colony and see Females then.Â  Even if its a Prologue or Flash-back kind of Scene.

I think there is the Potential to Explore more Background with the Predators, compared to the Xenomorph as that aways seemed like some Experiment/Creation Weapon created by the Space Jockey Race.....

Prometheus gave us a interesting route with showing us the Space Jockey/Engineers connection....

And so i think there is a lot of Background with the Predators that could be explored.Â  The Alien Prequels kind of showed us there was more to the Space Jockey Race than War Mongering and going around using its Bio-Weapon on Worlds..

And so we have to ask is there ANYTHING else with these Predators than just HUNTING? I do wonder if part of the Plot for The Predator MOVIE opens doors to expand on this species and its Agenda... the Genetic Enhancing World to World Plot could be interesting to expand on.

Maybe this Movie could lay foundations to Expand the Predator Franchise, as Prometheus attempted to do so with the Alien Franchise.Â  But as with Prometheus... i think they have to be Careful how FAR and how MUCH they try to expand on the Predators beyond the Bad-ass Hunting/Trophy Collecting Alien Race...

Would exploring their Worlds, and Race in context to what else they do apart from Hunting, and introducing Females and Infants could be something that could UPSET the Purists.

Well female yaut'ja with breasts would make it easier to identify that they are female, perhaps they have a different role than mammalian breasts?

Maybe the way to tell male and female is behavioral and not physically observable by human standards?

Also, the apparent lack of breasts may suggest there is no breast feeding and thus no serotonin for offspring?