If there's something missing from most of today's sci-fi cinema, it's the use of practical effects over CGI. Thankfully, in the Predator's case, practical effects and "guy-in-suit" has always been utilized in every Predator film - and will once again be used heavily in Shane Black's The Predator! The folks over at Den of Geek recently published an interview they conducted with Tom Woodruff Jr. and Alec Gillis of Studio ADI during their set visit last year. Woodruff and Gillis are no strangers to operating Predator effects and explained how important it was to blend the use of practical and digital effects for this new film. They also male mention of a "10-foot mutha..." - a massive Predator specimen who undoubtedly causes some problems for our band of unlikely heroes... Read on for an excerpt: We’re big fans of practical effects, because we think the real stuff just looks the best,” Woodruff says. “That’s not to say there’s not a place for the digital as well, because there always is. So there are several Predator characters in this movie that are practical, as they should be in our opinion, and we think it’s what the fans want to see: a real Predator standing next to a person.

There are little clues here and there, however, that not all the creature effects in The Predator will be practical. Later in the day, we see a sequence where a Predator goes flying backwards through a window – likely the same school window we saw Holbrook slammed up against in an earlier scene. It’s a small yet near looking stunt: we see the shot from a low, three-quarter angle as the Predator crashes through the wooden window frame.

Once the camera operators have caught the take, a crew member rushes in with those mirrored ball things that visual effects use to add CG elements to the sequence in post-production. First a mirrored ball is lowered in front of the camera, then a matt one, then a third one textured after the Predator’s skin: that pale, mottled grey with an amphibious, sticky sheen. Finally a prop arm is lowered into view; it’s unmistakably a Predator arm, but huge even by the alien hunter’s standards. Could it be that The Predator of the title isn’t a guy in a suit like the others, but a much bigger one brought to life with CGI? The occasional mention of a “10-foot mutha” certainly suggests that he will be.

There's plenty more available from Den of Geek's set visit, including numerous interviews with some of the film's cast - all of which emphasize Shane Black's focus on developing concrete characters who fans will feel for and connect with, much like the original film from 1987. You can read the entire report here!

Thanks for the share. I haven't seen any red flags thus far. Looking forward to this.

There are a couple interesting plot possibilities in that article. 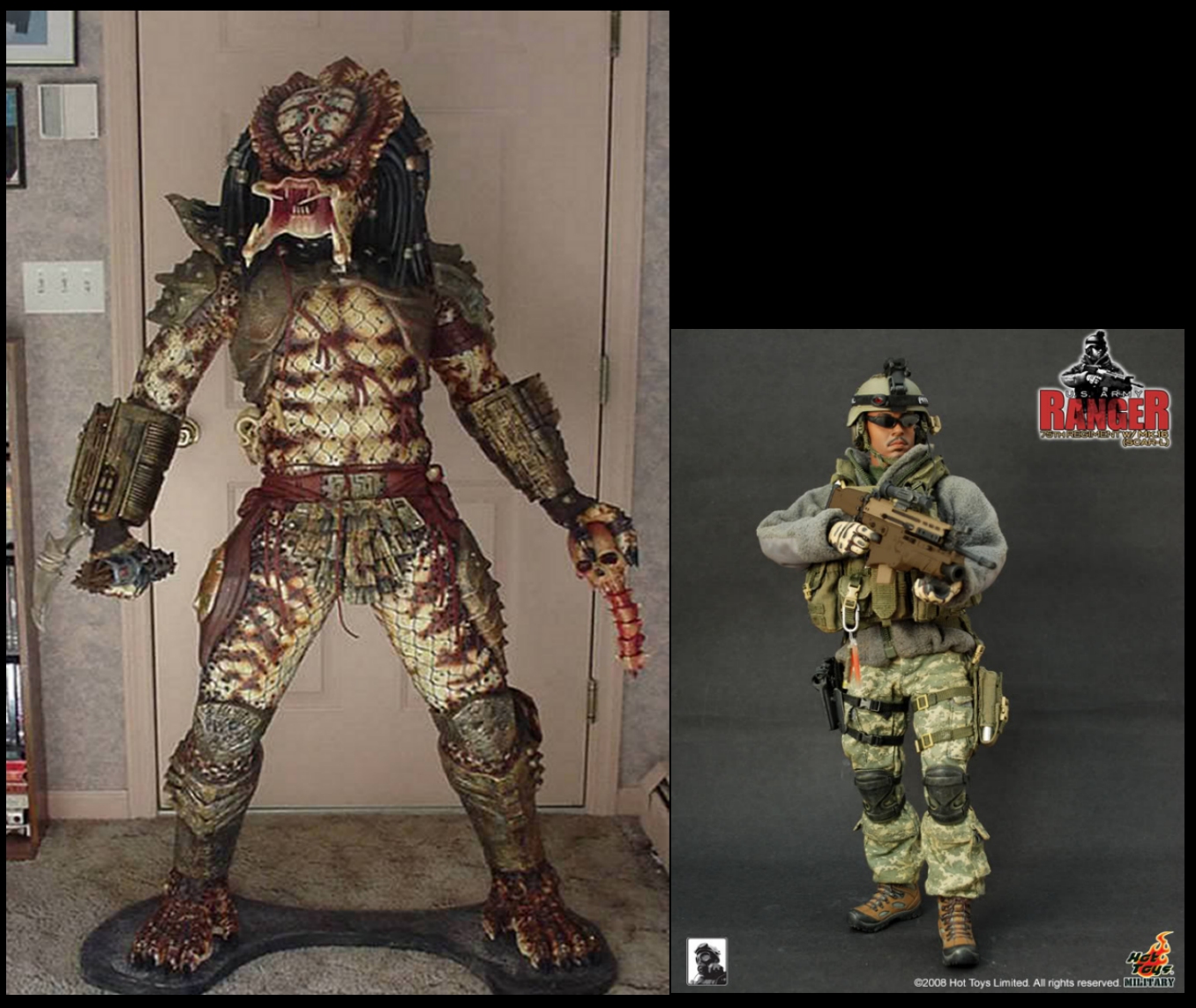 This is what kind of scale we looking at that....  Skull also to Scale too then ;)

But would this be a bit OVERKILL?

Do they know how TALL 10ft is?  Because Ridley Scott seemed to not ;)

I can only imagine if our Engineers was this True 10ft Scale with LOTR Effects.

Interesting.  So is the "10-foot mutha" THE PREDATOR, while all these others we've seen over the years are simply underlings or a subspecies?  Hmmm...

Who knows its all speculation at the moment, but with the Genetic Engineering Sub-Plot i would not be surprised if we get a Genetically Engineered Super Predator 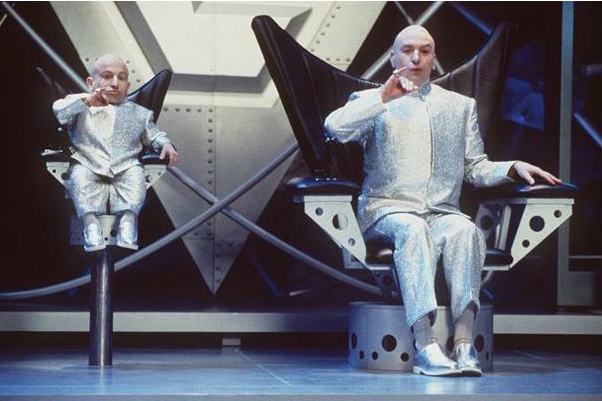 But even this sitting Image we can see that Mini Me looks Less than about Half the Height of Dr Evil.

The same applies here Sultan Kosen is  nearly 8ft 3" while Khagendra Thapa Magar is nearly 2ft 3" and so 3.6X Difference, so that if the smaller guy was say 5.5ft Tall then the Taller Guy would be 20ft Tall but the difference here looks like more than the Space Jockey in ALIEN compared to the close up Humans. 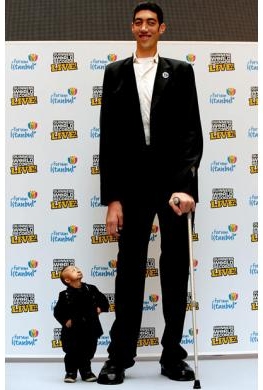 So Scale can be hard to judge...

So what i am saying is we could see say a 8.5ft Actual Predator and compared to a Average Human they could be mistaken for being 10ft.  So i am not sure we would see a Actual 10ft Predator but i would not rule out a 8-9ft one.... Bare in Mind Most Predators Stand between 6ft 10" and 7ft 4"

I am not against the idea that humans tried to mess with Predators genetically and accidentally created the 10 foot crusher- serves us right!

Unless this thing is created to Hunt Down Predators/Defense against them, It could even be a Predator Engineered 10 ft Mutha!

Looking at the Clues... i do get the Picture this could Follow either a Plot where the Government has obtained Predator Tech either after the first Movie, or the 2nd or maybe more recent.... and so we could see they are attempting to Re-Engineer Predator Tech!

And so Humans with Predator Tech.

I think we shall see some Captured/Escaped Predators without Predator Weapons using Human Technology/Weapons...

Maybe One Predator Fails to Escape and is subjected to Tests/Experiments that give us a Incredible Hulk Predator etc?

I like how things are going so far. As long as there is no Davidish dynamic...Actually, it could be a strange Godzilla nod if it goes that way.

the instant the huge predator was mentioned concrete jungle came to mind. is this plot gna centre around the same as the video game? the face plate on the left looks like the same as the one the predator in the trailer is wearing so is this a take from the avp game where a predator takes it because it belonged to a highly revered yautja and can show it what happened to it? be interesting to see.