Olivia Munn made it quite clear her character, Casey, will not stand idley by while the men in The Predator battle with the intergalactic Yautja. Speaking to Men's Health recently, Munn explained her and director Shane Black agreed early on that her character needed to have combat knowledge and possess the ability to throw down with an Alien hunter if need be - and apparently she will!

Between us—wink-wink—it was awesome. I’ll say this, my character knows how to use a weapon. You always see in movies that the guys just automatically know how to use it and the girls, they have to kind of fumble through it. I didn’t want her to be a soldier, but there’s no reason why she wouldn’t know how. Shane and I were on the same page about that immediately.

Olivia couldn't spill anymore beans regarding the film's plot, but through sources and leaked photos we can confirm the film will involve more than one Predator. We can also confirm the film will involve somewhat of a hunt between two alternative factions of Predator - one of which not being of "pure" lineage. We don't wish to spoil anything further so we'll leave it at that for now.

No real replies to this?

Oh well i was hoping for a Female Predator, as i think Females need more of a Role....   And imagine the only way she is detected, is via Green Goo on a Sanitary Product...

I think its interesting to see females be given more roles, its a shame when they dont get utilized to good degree in many movies

But Kudos to Female Leads in movies the last view years and i have to say they have done very good jobs.

Female Klingons were pretty badass, why not Predators?

I think thats a good point... i often make jokes regarding movies with sexual undertones... mainly because there is a Adult Cinema not far from me so i often make up names of our favorite movies made for the Adult Industry even going as far as 20 years ago... where i coined to my friends... i heard Bilston Cinema is releasing Indiana Bones and the $"%"£ Crusade.... or Womb Raider.... i have joked about a movie Sexual Predator...  thats about a Raunchy Female Predator comes down to mate with Men and Skin them alive.... but thats just me joking with my dark humor at times.

But certainly, if the Predators are Humanoid, can we rule out Females?  And i certainly think a Female Predator would kick a Female Klingon's Booty...

And you certainly would not want to mess with B'Elanna Torres and shes only Half Klingon ;)

But yeah i am totally in support of the more Feminist movies, even though we get complaints with some movies like Ghostbuster... Ghosbusters sucked not because of having Females, it was just not a great Plot or executed well.

I have heard some (not on here) moan about Daisy Ridley in Star Wars EP-7-8 and Felicity Jones in Rogue One, but i actually think they were some of the strongest and well performed characters from those movies.

I would be totally up for Female Predators, if done right.. i kind of like seeing Female Characters playing a Twist and a Dark Sinister Role... why i was a bit disappointed with Vickers, i felt she should have been more of a $"%£%

I am hopping that Star Wars EP9 reveals Rey in a twist where she becomes one with the Dark Side, and becomes pretty Sinister and Bad Ass....   but with Disney i think we are in for Fairy Tale Endings.

I think female Predators could use their gender and somewhat seductive qualities- if they have them (like Klingon women) to good effect. For Star Trek, it made an interesting dynamic and added complexity to that species/race. I don't think it needs to be overtly slanted male or female, but a balance could go a long way.

The Klingon women were tough warriors yet very feminine, had a certain allure and were intelligent. The Predator could go that way but would likely be a Klingon X 4.

Certainly could see a Female Predator appear to be somewhat seductive... until they removed the Mask that is ;) 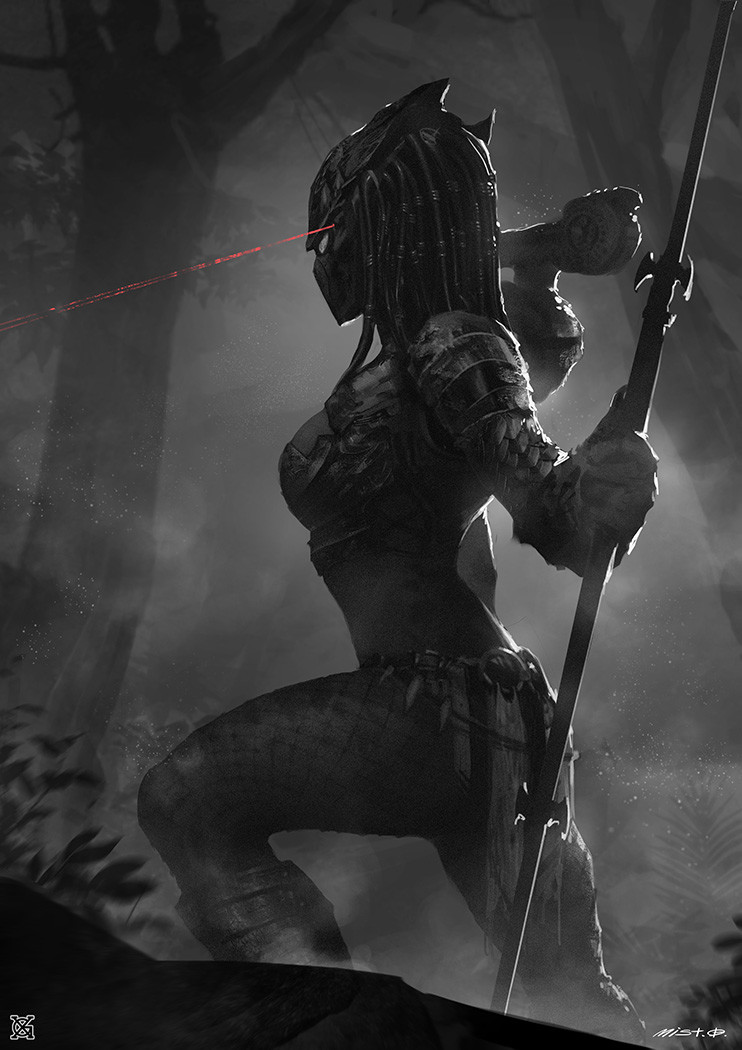